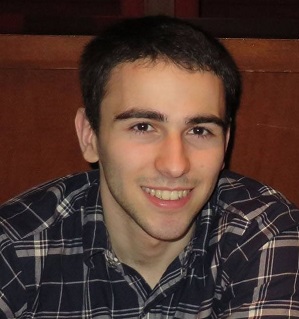 Assistant Professor of of Mathematics and Statistics, Slippery Rock University

Dr. Boris Brimkov received his B.S. in Mathematics from the University at Buffalo and his M.A. and Ph.D. in Computational and Applied Mathematics from Rice University. Broadly, his academic interests center on using graph theory and combinatorial optimization to model and solve practical problems with societal impacts.

In his Ph.D. research, Boris investigated several problems related to classical and dynamic coloring of graphs, and enumeration of graph attributes. In particular, he developed efficient algorithms for graph traversal and for computing certain graph polynomials. He also studied zero forcing - a problem involving propagation in networks which has been introduced independently in the contexts of linear algebra, quantum control theory, and electrical engineering. Boris obtained novel structural and computational results about some of the variants of the problem, paving the way for applications in power network monitoring, the design of logic circuits, and control of quantum computing devices.

As a Rice Academy Junior Fellow, Boris will focus on the problem of redistricting with optimal minority representation; he will work under the mentorship of Illya V. Hicks from Computational and Applied Mathematics and Robert Stein from Political Science. Redistricting is the process of partitioning geographic regions and population groups into electorates for state and federal legislatures. In states with diverse populations, districts in which minority demographic groups comprise voting majorities can help prevent minority vote dilution. So far, the formation of minority-majority districts has received relatively little attention from the combinatorial optimization community. Boris’s research will pursue several theoretical and computational investigations aimed at producing redistricting plans that are optimal with respect to minority representation.

Boris is excited to be an affiliate of the Rice University Academy of Fellows where he can engage with an interdisciplinary group of scholars who share his passion for understanding and solving practical problems.